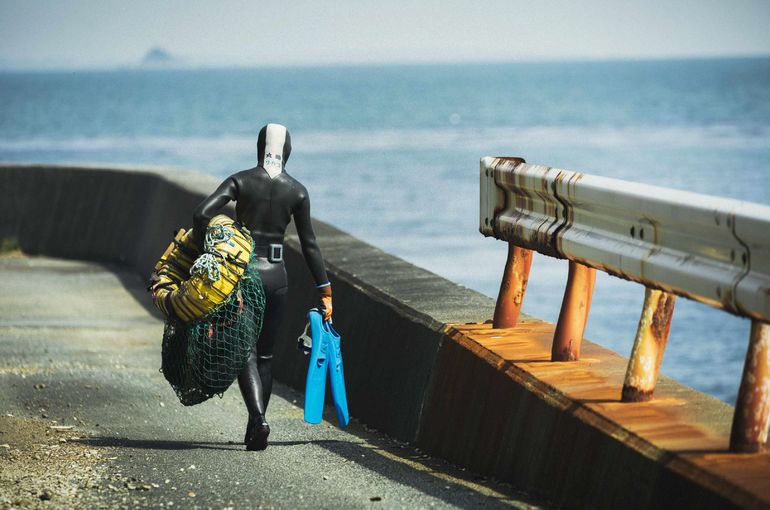 Hi everybody, how's it going?

Ama (or Ama diver) is written as 海女 in Japanese, and that means 'sea woman' or 'woman of the sea'. Women dive into the sea with simple diving gears.

We Ama divers make the livelihood by catching shellfish or harvesting seaweeds and sell it to the local fish market. We are not actually "selling" the seafood, but this time, let me just say so to make it more simple.

In Ijika, there are about 40 Ama divers.

Most of them are over 70 years old, and there are a few young Ama divers like me who moved from cities to do this unique occupation. There are some male Ama in other villages, but Ijika has only female Ama.

Aiko Ohno is the most famous since she moved here to become an Ama diver by the govermental project to revitalize local community of Ijika.

She's one of the best Ama divers in this village now.

Even she started Ama exactly on the same day as me, our diving levels are completely different.

As for me, I started diving after I moved to Ijika on 2015. And I'm still poor at diving and seeking for sea creatures.

Some skilled Ama divers like Aiko, they can make their livelihood and earn enough money to servive.

But some other Ama divers like me are not like them. The income from Ama diving isn't enough to pay everything, so we have some part-time jobs to fill the shortage of income.

My income from Ama diving was 70k yen last year.

It wasn't enough to make my living.

So, I had two part-time jobs last year; working at a oyster farm owned restaurant during winter, and working in the local tourism association 3 days a week.

If I could earn 300k yen a year, I probably won't have to have other jobs than Ama. But the reality isn't that easy.

I wished to be like Aiko before, but I was not able to achieve that level. So, I try to find a good balance between Ama and some other small works now.

I introduce my work and my Ama friends to visitors. They can see everybody has different ways of how to live with the sea.

I wish I can make enough money just from Ama diving one day, and no need to worry about extra works.